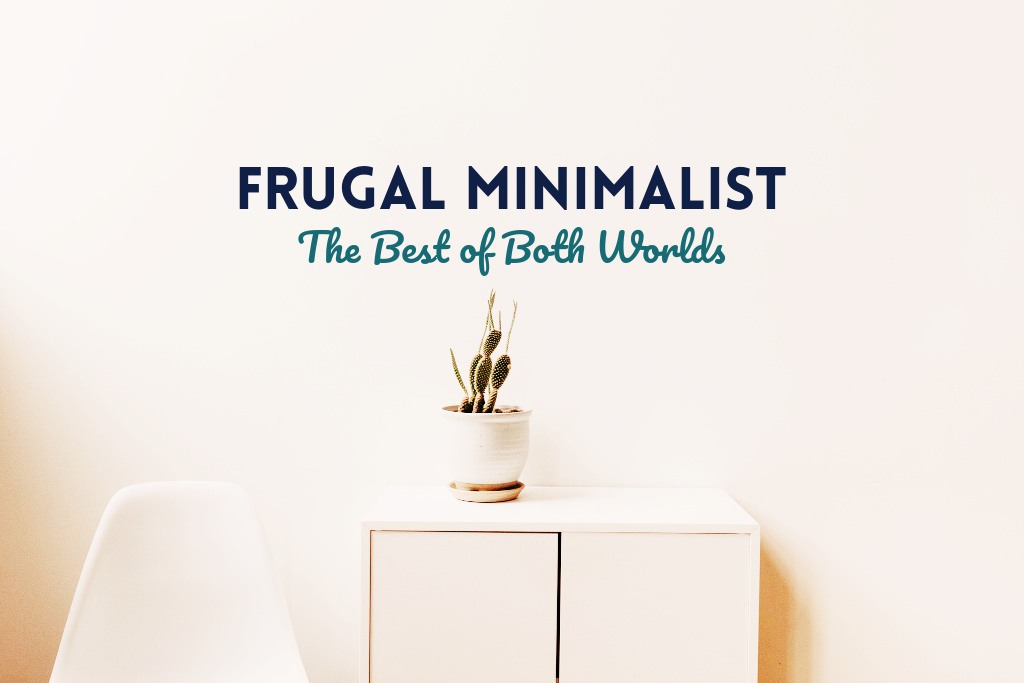 Some of the links on this site are Affiliate Links and if you use them to make a purchase, we may earn a commission. For more information, read our Disclosure Policy.

Being a Frugal Minimalist is redundant, right? Well, not really. The two words are closely related, yet there is a big difference between minimalism and frugality. However, by adhering to the basic principles of each lifestyle simultaneously, the result can be the best of both worlds.

At the very core, it is easy to make a distinction between a minimalist and a frugal person.

How they differ, however, is where you put the emphasis.

The Difference between Frugality vs Minimalism

A minimalist life of owning less stuff does not necessarily mean spending less money. A minimalist can have very few possessions but spend extravagantly on experiences. Furthermore, their few materialistic purchases can be luxurious and expensive. So, it isn’t true that, on its own, minimalism saves money.

Likewise, frugality does not automatically lend itself to owning less. A frugal person will buy in bulk (especially if it is a screaming deal). They also have a tendency to hold onto an array of items ‘just in case’ or keep objects to be repurposed at a later time. On a mission to spend less, a frugal person can be a bit of a pack rat.

When you really analyze the behaviors, it is clear to see a distinction between frugal vs minimalism.

What is the Frugal Minimalist Meaning

I believe, blending the two lifestyles into frugal minimalist living supersedes solely being one or the other.

When you look at Minimalist vs Frugal separately, the downsides of both frugal living and minimalism are glaring obvious.

While I agree with the minimalist money endeavors for quality over quantity, the practice can still lend itself to over spending and wastefulness. Meanwhile, people with solely frugal lifestyles can lead to cheapness and hoarding.

However, when you mesh the upsides of a minimal frugal lifestyle together – owning less and spending less – then the benefits are undeniable.

How I Became a Frugal Minimalist

I have always been frugal – at the very least, money conscious – and got better at it with time as I changed my relationship with money. Minimalism, however, was not my strong suit. My biggest offense was that I simply never threw anything away. If I could cram it in a closet or shove it in a drawer, it stayed.

I kept work pants that were too big and too small…just in case I gained or lost weight. I saved empty jars and containers – for no specific purpose – and stowed them in a drawer in the kitchen.

My husband Kris, on the other hand, has always favored a minimalistic lifestyle. My sister once remarked his apartment looked like the model because it was so sparse.

My First Steps Toward a Frugal Minimalist Life

When we got married and combined our households, we did our best to create a frugal minimalist home. While our individual influences were rubbing off on each other – he was becoming more money conscious and I was accumulating less stuff – neither of us completely adapted to a frugal minimalist mindset.

Then, Kris and I came up with a big goal and hatched our idea to quit our jobs and travel the world. We planned to travel for an entire year carrying nothing more than our backpacks and only spending at most $100 per day. Frugal Minimalism at its finest!

However, the real kicker was that we were letting go of our apartment…and nearly everything we had accumulated inside of it.

My mind was already scrambling at the concept of extended backpack travel but clearing out the entire contents of our apartment took minimalist frugal living to an entirely new level.

Warming Up to Minimalism

I won’t lie, becoming minimalist was painful. (Meanwhile, Kris was practically giddy about it, joyfully delivering bag after bag to the local charity thrift store and depositing the rest into the dumpster.)

My struggle wasn’t necessarily wrapped up in things; I didn’t have an emotional attachment to the stuff that we were sorting through and getting rid of. My issue was with the cost of those things, with how much I had paid to purchase those things. I mentally saw price tags secured to every item heaped in the donate and trash piles. It literally pained me as I calculated the dollar figures.

On a mission to make back the money on the things I was getting ready to throw away, I gathered up some clothes I thought I could sell. I neatly folded 27 pairs of black work pants in various sizes and hauled them to a consignment shop. I was politely (and not-so-politely) given a shake of the head and a grim, ‘No, thanks.’

Apparently, my frugal finds that I purchased off the sale rack years earlier were not exactly the kind of merchandise consignment shops want. Therefore, they were destined to be donated to thrift stores – along with home decor and kitchen gadgets I’d accumulated over the years.

The alternative to selling and giving everything away was to pay for storage – and that did not jive with my frugal mindset. To me, storage (like being in debt) is paying for something twice.

We had no idea where our travels might take us, but we were fairly certain that we wouldn’t return to the city we were leaving. Therefore, paying for storage was a non-conversation. I simply had to get on board with adapting to a minimalism mindset. Let me assure you, I channeled Marie Kondo on a monumental level.

We worked on clearing out our things for months – and in the process, I had a shift of perspective. Little by little, as we removed the bulging excess from our home, I began to breathe a little easier. I felt a weight being lifted. Out from under my stuff, new possibilities arose.

Find out what items I recommend for a frugal kitchen in my blog post, Minimalist Kitchen Essentials!

When we first started traveling, the concept of owning less stuff and spending less money was novel. It was freeing and refreshing. Even though we were traveling and spending money, we also found that we were saving money by living more simply. We had abandoned the materialistic trappings of Own More, Spend More.

In fact, some might say that my personal growth evolved into becoming an extreme frugal minimalist. With the exception of a few sentimental items I stored at my mom’s house, all of my worldly possessions fit into my 45 liter backpack. My intense tracking of expenditures – down to the last cent – ensured we stayed under our target budget.

While I typically shy away from any extremism, pairing extreme frugality and extreme minimalism granted us exponential freedom. By living minimally to save money, we quickly realized our one year timeframe could be extended indefinitely.

As the months and years ticked by, the novelty wore off, but we had formed new habits (not that all of them paid off!). However, the frugal minimalist mindset became ingrained in us – and actually helped us to spend less money.

What we realized was that being both minimalist and frugal – owning less and spending less – was undeniably beneficial.

My frugality has always dictated that I be money aware, but that alone did not keep me from acquiring things (my overstuffed apartment was proof of that!). However, as I moved more into the realm of minimalism, my desire for materialistic possessions drastically decreased. I no longer felt satisfaction when buying stuff. With happiness no longer being connected to making purchases, I felt less need to buy things – and that naturally resulted in me spending less money.

I inherently value experiences over things; it is just the way I am built. Since I was young, I would rather do something than have something. Yet, as I became more minimalistic, I began to value experiences even more. I believe that without the clutter of things and my happiness untethered from shopping, I was able to realize a deeper joy in my experiences.

With fewer materialistic wants and more valuable experiences, I realized I was enjoying more life. A simpler life. While I could attribute my new lifestyle of travel and self-employment to my renewed enjoyment, neither of those things would have been possible if I had not become a frugal minimalist.

Find out how I stay entertained for free in my blog post, 98 Free Activities! And be sure to check out my Top Tips For Cheap Dates and my Favorite Frugal Hobbies!

5 Steps on How To Become a Minimalist Frugal Person

As proven by my own personal story, anyone who wants to adapt their lifestyle to one that is both minimalist and frugal can do it. To help get you started, I’m sharing a few of my top Minimalist Frugal living tips.

#1 Analyze Your Current Spending and Make a Budget

Dive deep into your Money Numbers and create a monthly budget so that you can clearly see how you spend your money. Are you leading a frugal life or a frivolous one? Use my Frugal Living Hacks if you need to find ways to cut back.

Take a good, hard look at what you own. One of the best Minimalist Frugal household tips is to go through your home room by room and start the process of decluttering. Reading Marie Kondo’s book, The Life-Changing Magic of Tidying Up, can help.

Set your goals and make a realistic plan to achieve them. Be specific in what you want for your future and make an actionable plan to succeed. This may mean learning how to be more frugal with food or completely overhauling your living space.

Whether you are aiming at becoming more frugal or more minimalistic – or both, you will need to change some of current habits. You cannot achieve minimalist frugal lifestyles without changing your current behaviors. You must spend less and accumulate less. Develop frugal spending habits and minimize your possessions.

Interested in more of my Life and Entertainment Tips? I round them all up on the Frugal Lifestyle blog page!

We Want To Know: Do you consider yourself a frugal minimalist? Are your habits and traits more geared toward being frugal or minimalist? How about taking things to the next level with Extreme Frugality? Tell us in the comments!

Frugal Hobbies: 41 Cheap Hobbies to Pick Up for Fun

How To Get Your Spouse To Be More Frugal

December 24, 2022
Manage Cookie Consent
To provide the best experiences, we use technologies like cookies to store and/or access device information. Consenting to these technologies will allow us to process data such as browsing behavior or unique IDs on this site. Not consenting or withdrawing consent, may adversely affect certain features and functions.
Manage options Manage services Manage vendors Read more about these purposes
View preferences
{title} {title} {title}